What is Dock Diving?

It is basically a distance jumping contest over water. Dogs run down a 40’ dock (either a mobile dock or a structure dock) and launch into the pool (or perhaps a lake). Pools will vary from a minimum of 40’ in length and 20’ wide up to 100’ in length and 40’ wide.

Dock Diving as we know it today gained attention in the mid 1990’s when ESPN featured it on the Great Outdoor Games show. Back then, dogs were jumping into lakes and attaining distances of 20’ or so. Today the top dogs are jumping into the mid-30’ range with the record being over 36’.

How Did We Get Into Dock Diving?

Like most people, my wife saw it on TV and wanted to try it with a previous dog we had named Sadie and at 12+ years of age she earned a UKC title in Dock Diving. Sadie also trained and competed in various other dog sports, as do our current dogs.

We had lost a dog, Sam II, and were looking for a dog for Ronalee to compete in Agility again.  A friend suggested a breeder about 90 minutes from us who had a litter of field line Labs. Field line Labs are of slimmer and taller build and more athletic than the traditional English/show line Labs.

We met the litter at 2 weeks of age and proceeded to visit weekly to learn the personalities of each puppy. We had pick of the litter and wanted to get the puppy that had the most outgoing traits. Storie had a very outgoing personality and was always the first puppy out to meet us and was very vocal. The breeder actually would have picked her if she were keeping a puppy and indicated she might be “too much puppy” for what we wanted, but it turned out to be a GREAT choice! So we picked the puppy with the yellow collar and brought Storie home on Halloween night 2010.

We do not live on a lake nor have a pool and when we got started in the sport there were no facilities. A friend has a farm pond, so we took Sadie (12 years old) and Storie (8 months old) to see what reaction Storie would have to water.

I threw a bumper in for Sadie, thinking Storie would stand by and watch. Next thing, I am hearing thrashing in the water as Storie had launched herself into the pond as Sadie was going in to retrieve the bumper. We repeated this routine several times and Storie gained more confidence with each turn and was trying to wrestle with Sadie for the bumper. We then had to make the girls take turns to prevent injury and to give them each a break.

Today the dogs and handlers have access to many permanent facilities around the country as well as mobile docks that set up at dog shows, fairs and festivals.

When training a new dog, it is best to take it slow, build the confidence with both the dog and handler, and you should eventually have a happy dog that will love the sport.

Dock Diving is a recognized sport and titles can be earned at events sanctioned by both the United Kennel Club (UKC) and the American Kennel Club (AKC). One has to register their dog (purebred or mixed breed) with the respective organization and then choose where to compete.

There are multiple companies that host Dock Diving events, some are sanctioned as I mentioned above and some are independent and have no affiliation with either UKC or AKC but do have their own titles.

Measuring a dog’s jump is done by either eyeball or camera and is calculated at the point on the body where the dog’s tail meets the body and enters the water. Measuring banners are on the sides of the pool and judges are trained and have to meet certain requirements before being certified by the sanctioning body. The exception is the Incredible Dog Challenge. They use an overhead camera and measure to the farthest body part forward as the chest enters the water.

Getting Storie Started in Dock Diving

The first recorded jump for Storie was 7’ at 11 months of age  She then refused to jump on her second round, and Ronalee had to get into the pool to entice her to jump.  Clear water (versus pond/lake water) spooks some dogs, so this is not uncommon. Storie then jumped around 10’ and we were considering where and when to jump next.

A county fair about an hour from us had a jumping organization there, so we decided to give it a try and had hopes of earning a Dock Diving title with UKC. At the end of the second day of jumping, Storie was hitting 17’ with just running off the dock and not really showing any desire to track the bumper (we later learned how important this would be) and our hopes of earning a title were dashed as she jumped out of her division. Back then I think there were 5 divisions and one needed 5 jumps within that division for a title.

The person running this event pulled me aside and gave me a pep talk about the potential he thought Storie had if we were willing to put in the time and travel. He was right and at just 2 years of age, Storie recorded her first of 4 National Championships in the Ultimate Division with UKC. She has also won multiple Veterans (dogs 8+ years of age) Ultimate Division championships.

We then went on to compete with AKC and Storie has won multiple championships in both open Elite division and Veterans (dogs 8+ years of age) Elite Division.

Storie has won well over 100 events that had a divisional final at the event. Her personal best with UKC is 30’, AKC is 30’7” and the Incredible Dog Challenge is 32’4”

How Far Do Dogs Jump?

Back in the day, 25’ was considered big and did not happen often. With the evolution of facilities and training, improved nutrition, more chances to compete and different breeds jumping, distances of well over 30’ happen on a regular basis.

Retriever breeds dominated at one time, then the Belgian Malinois came on the scene along with “sport mixes” and the past several years the Whippet breed has risen to the top. Jumps of 35’-36’ are not uncommon now. Whippets have competed for a few years but their rise to the top followed the handlers getting the dog to track the bumper as it is thrown. This gives them much more height and propels them out over the water. Bumper/toy tracking is extremely important for most dogs to attain bigger jumps.

The Dock Diving organizations have multiple divisions, so dogs are competing against dogs that jump similar distances. This levels the playing field to a certain extent.

It has been a great ride for Ronalee and I and Storie, and we strongly feel Earthborn Holistic has been a major factor in her success and ability to still jump 25’+ at almost 11 years of age. Take your dog out, enjoy every minute you have with them and don’t be afraid to get your feet wet in this great sport! 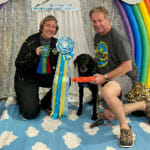 JD is a former pharmacy technician and retired rural mail carrier for the USPS. Ronalee is a former buyer/merchandise planner and currently a GED instructor for a neighboring county. They reside in West Milton, OH with Storie, Sequel, and Stitch the cat. Their hobbies are their dogs, training and competing with them. Storie will be 11 on Sept. 3 and is a field lines Labrador Retriever. She weighs 49 pounds and is still in great shape and loves her Earthborn Holistic Food. She is a multiple time National Champion with AKC and UKC, former world record holder with both and has appeared on national television multiple times.
Training & Behavioral