For this you try having toys that your dog only has access to while he is playing with you with it. Once that playtime is over, the toy goes away and isn’t played with again until you bring it out to play together. This will help build that play connection between you and your dog.

To initially build interest, try using an extremely high value reward. Anytime your dog shows interest in the toy, reward. For example, if you are starting to build a fetch drive in your dog, start by doing a short throw. Even if your dog doesn’t bring it back or even completely get it. If they show interest in your throw, reward them! Slowly add more stipulations to the reward, like once they are really showing interest, change your rewarding until after they pick up the toy you threw, then move to rewarding when they bring it back.

Once you find a toy your dog seems to like, get two of them and start on the two-toy game. This will help build drive and help if your dog doesn’t seem to bring a toy back after you throw it. Throw a toy in one direction. Once they get it, show them you have another toy and throw that one in the opposite direction. Eventually the hope is that the dog will completely bring the first toy back in your direction and drop it while they pass you to chase the other toy.

This is one of my favorite drive building exercises, not just for toys but when working recall, agility, etc. To do this exercise with a toy you will hold onto your dog (restrain them) and throw the toy. While still holding onto them, ramp them up with excitement. Our excitement builder is “ready, steady”. I will say that a couple times to build the pressure, and release him to go get the toy. That built up excitement really helps drive them to whatever it is you threw.

My dog is not a tugger, and this has probably been the hardest to work on for us. I highly suggest investing in a real fur tug, even a flirt pole to help really engage that prey drive. Start by dragging the toy in front of your dog, if they show interest then let them have the toy. The biggest thing with starting to learn to tug is that the dog needs to think they can beat you and “win” the toy. Once they start tugging, keep “giving” it to them after a couple tugs to keep building up that drive. The more your dog thinks they’re winning the more they will want to play in the future.

The KEY to learning anything new is to keep your sessions short. Even just minute long sessions to start out can be so beneficial. A lot of dogs with low toy drive can lose the initial excitement very quickly, which we don’t want. So, by keeping the sessions short you are leaving them wanting more and finishing the session with them still interested instead of disengaged.

Building up a drive in your dog can be a long, slow process. Don’t get discouraged and always keep at it. There will be times you bring out the toy and your dog will have zero interest in it–that’s okay! Put it away and try again later. Take your time, like mentioned earlier, and keep sessions short at first. It may take months and months to get the drive that you want, but watching your dog learn to love and and your bond grow will make it all worth it! Playtime with your dog should be fun for both of you, so get down on your hands and knees, get excited, show your dog you love the game just as much as you want them to! 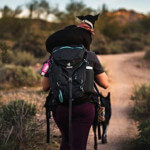 Ashley and her two rescue dogs Winston and Rose live in Arizona. They love to get outdoors and explore all over the state. You can follow along with their adventures on their Instagram @desert.duo.
Training & Behavioral

Please wait while you are redirected to the right page...