Meet in a neutral environment

When we brought Summit home, we decided to have him and Koda meet in a neutral place first, before meeting inside the house. We felt this would be good for Koda so that he got a chance to see the new puppy without being protective of his place and things.

We took Summit to a nearby trail and brought Koda over to meet him. First, I held Summit and slowly brought him down to Koda’s level. Koda can get very rambunctious and excited so I didn’t want him to scare the puppy right away. Then, when the puppy started wagging his tail and showing signs of excitement to meet Koda too, I put him on the ground and let them slowly sniff each other. They did great with their first interaction!

One thing that we did when having the boys interact was taking it very slow. We didn’t want to push it. While some dogs are fast friends from the start, this was definitely not the case with Koda and Summit. Koda was very excited the first few days, but when he realized that Summit was not just a temporary visitor to the house he started to change his behavior. He didn’t want to enter most rooms in the house, he completely ignored Summit, and was anxious and lethargic inside.

I’ll be honest, I got worried and I was convinced we had made the wrong decision, but now I know that Koda just needed some time to get used to the new situation. We let him do what he needed to do to feel comfortable and after about three weeks, he started playing with Summit! This might take even more time for some dogs. I know often it could even take months for new dogs to start getting along inside the house, but that is okay–just be patient!

Reward for positive interactions together

Something that was very important for getting Koda used to having a new little brother around was rewarding him for any good interaction with the new puppy. This could even mean just standing next to the puppy. We gave him a ton of treats any time he would let the puppy near, any time he would willingly go up to the puppy without showing signs of aggression, and any time the puppy took one of his toys. We wanted Koda to associate the puppy with positive moments. We also took them on walks together because Koda absolutely loves walks. We hoped that by bringing the puppy along on this fun activity, he would realize that the puppy is there when he is having fun!

Often, we think we should reward our older dog heavily when spending one-on-one time together so they continue to feel loved when they feel like they are getting replaced. One-on-one time is definitely important for the older dog, but it is also important to reward them whenever the puppy is around!

Advocate for your older dog

Make sure to advocate for your older dog when you bring your new puppy home. Let’s be honest–puppies are adorable, but they can often get annoying. Summit in particular is always high energy and trying to jump on Koda to get him to play. Sometimes we stop this behavior for Koda’s sake because even when he doesn’t correct Summit we can tell when he just wants to be left alone. We needed to make sure that we would let Koda have his alone time, not only with us, but also completely to himself. This is when it is great to have a crate or playpen for your puppy to be in or a crate for your older dog to go in when he wants his time alone!

Don’t be afraid to ask for professional help

There is absolutely no shame in seeking out help. Sometimes you need extra work to get your dogs to get along. When I was feeling anxious and worrying that Koda and Summit would never play, I spoke to some people who told me they worked with a professional trainer to help their dogs understand each other’s body language and behavior so that they wouldn’t get into fights anymore. I think that as long as you are committed to creating a happy home for your dogs, there are resources out there!

Now you have reached the point where your dogs are best friends and just want to play and wrestle together all the time, but sometimes that wrestling can get a little rough when your 70 lb husky (Koda) is pinning down the new puppy (Summit)! We always make sure that when they are interacting, we are watching. Koda has never reached a point where he has hurt Summit, but we want to make sure that no accidents occur.

We also always monitor them when they are out in the house together at the same time because sometimes Koda can still get protective of his things. When we first brought Summit home, we made sure no toys were left on the floor. Now that they are getting along we let them share toys, but every now and then Koda will want one to himself, so we want to make sure we are there to moderate those situations if necessary. I’m sure that some day they won’t need to be supervised as heavily when Summit continues to understand and learn his older brother’s body language, but for now we make sure they are safe by watching all their interactions!

I hope you find some of this information helpful when you decide to bring a new puppy home. We would also love to hear any tips that you may have used when introducing your new puppy to your dog! 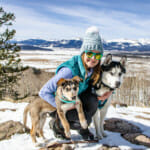 Marta has been living in Colorado for about 6 years and making the most of every moment by exploring everything this beautiful state has to offer. In October 2019, Koda entered into Marta and her husband’s lives when they adopted him from their local Humane Society in Colorado Springs. Every day since then has been an adventure. Recently, they also adopted their new puppy, Summit! Koda and Summit both love hiking and finding all the new sniffs on the trails! You can follow along with all of their adventures on Instagram at @koda_the_colorado_husky.
Training & Behavioral

Please wait while you are redirected to the right page...